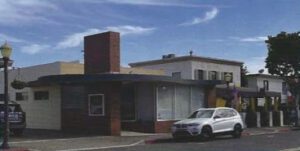 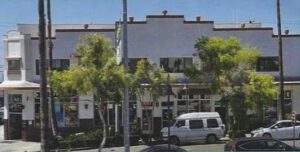 The Art Deco style began in France in the early part of the 1900s. The style evolved and came to the United States in the 1920s and stayed until the middle of the 1940s. This style of design influenced not only architecture. but car and train design, as well as ocean liners and even radio and vacuum cleaner design.

In San Clemente, there are a few examples of the Art Deco style buildings constructed in the 1940s right after the city stopped requiring all architecture to be built in the Spanish Colonial style. On the corner of South El Camino Real and Avenida Granada is a beautiful building that was carefully restored a few years ago to its original 1940s Art Deco style. Today, it houses Catalyst surf shop (at 124 S El Camino Real) and several eateries downstairs. and offices upstairs.

One of the best examples of Art Deco style can be seen in San Juan Capistrano at 31866 Camino Capistrano. This building was designed and built in 1939 by an architect named Alexander Law for Dr. Paul Esslinger as a medical office building. This building has been on the National Register of Historic Buildings since 1988.

Shortly after the Art Deco period of architecture, the next trend was Mid-Century Modern. which began as early as the 1930s but became very popular in the 1950s.

San Clemente has a lot more Mid-Century Modern buildings. Many have been modified over the years, but a few iconic buildings remain, including Pedro’s Tacos at 550 North El Camino Real and Conrad & Associates Realtors at 1000 South El Camino Real.

One of the most prolific architects of Mid-Century architecture was Chris Abel, whose buildings can be seen scattered throughout San Clemente. Later, he became known for his Laguna Beach modern projects. Chris Abel practiced architecture from the 1940s to around the year 2000 in South Orange County. He died in 2004 at age 80.

The Conrad & Associates Realtors building was designed by Chris Abel. He designed many other houses and commercial buildings in San Clemente, including the former San Clemente Chamber of Commerce building at 1100 N. El Camino Real and Jack’s Surfboards on Del Mar.