When San Clemente was built in the 1920’s, it was a new town surrounded entirely by ranch lands. The large ranch to the south was soon to become the Camp Pendleton Marine Base. The base was established in 1942 during World War II, but the land has a long history.

The land that became the base is over 125,000 acres of moun­tains, streams, valleys and Southern California’s only free flowing river and longest undeveloped coastline. There is also a long history of Native Americans living on the land. The Acjachemen indigenous tribe lived along San Mateo Creek long before the Spanish came to California. They were hunter-gatherers, basket weavers, built boats of tule to catch fish, and made medicines from native plants. The creek today runs through the base and ter­minates in the Pacific Ocean at Trestles Beach.

The history of the land is also one of ranches and cattle herd­ing. The base houses historic structures, including the Las Flores House, which was built in 1864. The House is a prime example of Monterey Colonial architecture, categorized as a sub-style of Spanish Colonial architecture, built of adobe and featuring a prominent second-story balcony. The last family member lived there until 1967 and then the house was fully restored by the Marines and is now a protected historic landmark.

Currently there are 90 bison living and roaming free on the base. They have been there since 1973 when the San Diego Zoo began to gift the base 14 bison over the period of six years. The herd has grown over the years and the base maintains a strong program to maintain and protect the bison. There are only two bison herds in all of California – in Camp Pendleton and on Catalina Island. 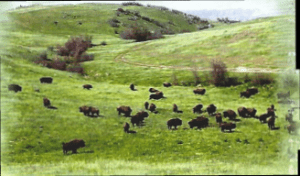 Roaming buffalo herd on the base. Photo by Sgt. Dylan Chagnon 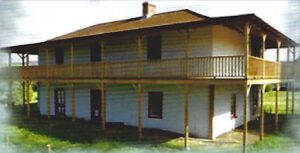 After World War II the base leased a large portion of land to many farmers to grow vegetables, including many varieties of chiles. These farmers eventually were phased out, but some of their families still live in San Clemente today.

One of the greatest gifts that we have received from Camp Pendleton is San Onofre State Park. This large section of coastline became a state park in 1971 when then-President Richard Nixon negotiated the contract with the base for 160 acres of the best surf in California. The lease is due to expire this month, but the CA. Dept. of Parks and Recreation and USMC are in negotiations, with the potential extension to run through August 0f 2024.

During the Vietnam War, 20,000 Southern Vietnamese families were brought to Camp Pendleton as a makeshift refugee camp. Many of those families ended up living in San Clemente going forward. Anyone who lived in San Clemente in 1975 prob­ably remembers the Alpha Beta Grocery Store on El Camino Real which had a large section of Vietnamese food available.

Camp Pendleton has managed to preserve its natural environ­ment from the sea to the west and mountains to the east. The base serves two purposes: one as the largest military base on the West Coast and as one of the largest preserved natural environments on the Southern California coast.

San Clemente has always welcomed the military families and the many retired veterans that have settled here. Before Covid there were tours of the base and its historic structures available to the public. Hopefully soon again the base will resume these tours.