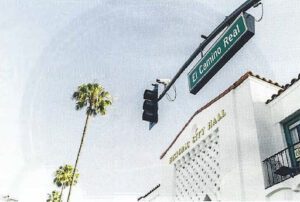 The tall white building at the top of Avenida Del Mar has a golden sign that says Historic City Hall. Most people probably assume this to be true, but in fact, this building was never San Clemente’s City Hall building.

The actual “historic” city hall was most likely up the street a few blocks at El Camino Real and Avenida Miramar. Today, that building houses an independent press agency called Zuma Press, and there is very little information available about the building’s history.

The Historic City Hall building at the top of Avenida Del Mar is also called the Easley Building, named after the man who built it in 1929. The building did serve as the city clerk’s office, and over the years has housed a Bank of America, business offices, a music store and a San Clemente history museum. Today, the office spaces are rented out to various businesses by the current owner.

The two-story Easley Building is 9,845 square feet and contains 22 offices. The architect that Easley hired was one of the most well-known at the time, Virgil Westbrook. He incorporated many Moorish designs into the Easley Building.

Westbrook’s designs were inspirational and magical. He knew how to incorporate the fine and fluid details of Spanish Revival Architecture into _his projects, and his proportions were perfect. San Clemente’s founder, Ole Hanson, was a big fan of Westbrook’s work, and hired him to design many of the community buildings in town. In fact, Westbrook probably designed more buildings in San Clemente than any other architect.

The Easley Building was built by the Strang Brothers, the contractors who built many of the commercial buildings, as well as homes in early San Clemente.

Oscar Easley’s legacy as the concrete contractor in town can still be seen on some of the historical sidewalks around town, which say “O.F. Easley Contractor.” One piece of stamped sidewalk that came from Max Berg Plaza Park has been preserved by the San Clemente Historical Society. Max Berg Plaza Park at 1100 Calle Puente was one of the first places constructed in 1926 when the city was founded.

At some point, the Easley Building was renamed Historic City Hall, possibly by a property owner trying to capitalize on the building’s historic significance. It may never have officially been San Clemente’s city hall, but the Easley Building remains a picturesque reminder of the architects and builders who constructed our beautiful Spanish Village by the Sea in the 192Gs.