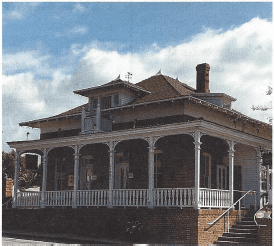 Photo: The Egan House in nearby San Juan Capistrano has a long and interesting history.

Just up the road from San Clemente in old town San Juan Capistrano is a red brick house that looks slightly out of place in a town with many historic Spanish style buildings. This house currently houses a cafe and bakery called Ellie’s Table, but for 100 years it was used as a family home.

Judge Egan was the building’s original owner. He built the house in 1893, lived there and also used it as his office. The judge had a very interesting life. He was born in Ireland in 1842 and came to the United States at the age of 10 as an orphan. When he was 19, Egan joined the Confederate Army to fight with the South in the American Civil War. After the Civil War, he wanted to get as far away as possible from the memories of the war. He came to San Juan Capistrano 1868 where he was able to purchase 160 acres of government land north of town. There, he planted crops and built an adobe on the edge of Trabuco Creek.

In 1870, Egan was elected justice of the peace and continued to be elected for the next 20 years. His career was very diverse and he had many jobs over the years including judge, Los Angeles County Supervisor, surveyor, school trustee, telegrapher, notary, agent for other landowners. keeper of rainfall records and dispenser of charity to the needy. Judge Egan was also considered an authority on old Mexican and Spanish land grants. Because of his many talents, Judge Egan was called the “King of Capistrano” and also the “Irish Alcalde.”

In 1883, Judge Egan hired William English to build his red brick house, which he called Harmony Hall. This Renaissance Revival home served as Judge Egan’s home, as well as the town courthouse and his office until his death in 1923. Judge Egan was known for hosting dinner parties, balls and picnics. He was famous for his punch, which was made with Irish whiskey, and he was also known as a great storyteller.

The second floor of Harmony Hall was destroyed in a fire and was rebuilt in 1898 by the original builder, William English.

The house was used as a residence until the early 1990s, when it was purchased by Sue Di Maio who owned several Native American art galleries and shops across the west. She converted the house to commercial use with the help of Lang Lampert Architects.

This required adding parking in the back of the building, constructing an accessible ramp up to the building’s front door and building accessible bathrooms for customer use. The building also required seismic retrofitting since brick buildings from the 1880s consisted of stacking bricks with mortar and had nothing to resist the motion of an earthquake. Retrofitting was done by adding steel supports throughout the building that would prevent the bricks from falling during an earthquake. ‘

The Griffith family purchased the building in 2014 and made additional improvements. Today, the building is Elle’s Table at Egan House, a great place to have lunch. To check out this historic building, swing by 31892 Camino Capistrano or stop into Ellie’s Table for coffee or a meal.