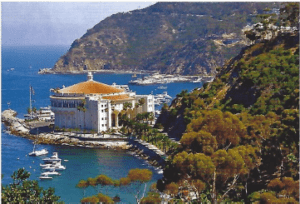 When San Clemente’s North Beach area was master planned in the 1920s it was designated as an entertainment and cultural district. The swimming pool and the beach club, as well as plans for future developments in the area, were designed to promote community involvement. The dance casino and the theater were part of the plan but weren’t built for another ten years because the Great Depression put everything on hold.

As the town began to recover from the Great Depression the Casino was built to help attract new residents to town. It was completed in 1937 and the grand opening on July 31st attracted 5,000 attendees from all over southern California.

The San Clemente Casino was a dancing casino, not gambling, and was a smaller version of the casino on Catalina Island that was built in 1928. The Catalina Cas·1no included a theater on the ground floor and a ballroom style dance hall on the top floor. San Clemente finally got its own theater next door in 1938.

The Casino was built by the Strang Brothers who were the local contracting firm known for building many of San Clemente’s iconic buildings. According to historic newspaper articles, the large domed building was constructed in just a few months by a crew of over a thousand workers who were available for low wages near the end of the Great Depression. Originally estimated to cost $25,000, the building actually cost $75,000 to build.

The recreational nightlife of the Casino ended in 1942 when the U.S. Coast Guard took it over as their “spotting station” for Japanese invasions. It would find other uses over the years including a gambling hall, a Moose Lodge and finally Sebastian’s West Dinner Playhouse which lasted into the 1980s. The dinner theater once again brought fame to the Casino with the performance of Broadway plays by famed actors. Once Sebastian’s closed its doors, the Casino sat empty for a number of years.

The Casino was purchased and restored into a conference center by Richard Lee in the 1990s.

Later, a group of developers tried to build condominiums on the site which required relocating the dome. The San Clemente Historical Society fought this proposal and won.

In 2009 it was sold to Linda and Shaheen Sadeghi who are known for their redevelopment and reuse of older buildings including The Lab Anti Mall andThe Camp in Costa Mesa and for converting the historic Anaheim Packing House into a food hall. The Sadeghis updated and further restored the Casino into a wedding and event center. A portion of the building that was originally storage space is now the French bistro Moulin.

The Casino is once again thriving and a valuable contributor to the history of San Clemente.