Then and Now: The Miramar Theater 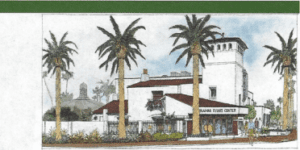 This rendering shows the future plans for the Miramar Theater.

The Miramar Theater still stands today, located at the official entry into San Clemente along Pacific Coast Highway 1 at the north end of town. At the time, this was the only way to drive into San Clemente from the north since the freeway was not built until the 1960s. The iconic 44-foot high tower greeted visitors as they entered town from PCH.

Across the road from the theater was the community pool, built in 1928 as a gift to the town by Ole Hanson and called the San Clemente Beach Club. Today, this complex is known as the Ole Hanson Beach Club, and is available to rent for weddings and other events, and also offers seasonal public swimming for the community. The casino dance hall was built adjacent to the Miramar Theater in 1937. Like the Ole Hanson Beach Club, the Casino has been beautifully restored and is available to rent for events. In 1942, the San Clemente Bowling Center was built next to the theater. The north end of San Clemente became an entertainment hub.

The Miramar Theater was designed in the Spanish Colonial style of architecture by a well-known Southern California theater architect named Clifford Balch. There were 750 reclining seats, which was unique at the time. The interior was luxurious with chandeliers and drapes, and the building had a heating and cooling system.
Because the theater was designed after the 1933 Long Beach earthquake, building codes had been rewritten to make buildings safer. The theater was mostly constructed of concrete walls with reinforcing steel embedded within the concrete. The lobby and tower are wood framed and the roof is framed with large wooden trusses.

The theater stayed open until 1960 when the population of San Clemente was 8,500. It was re-opened in 1980 for a while with live entertainment, and then in 1989 it was once again opened as a movie theater for a short time.

The property has had several owners over the years, some who wanted to tear down the theater and build something new. Fortunately, with the help of the city and the San Clemente Historical Society, the California Office of Historic Preservation and National Park Service, was convinced to designate the theater a historic site, which does not allow for its demolition. In fact, the entire North Beach area earned national and state historic designation in 2021, and is now officially known as the North Beach Historic District.

The current owners of the Miramar Theater complex are in the process of renovating and bringing new life to the buil:dings. The theater will become.an event center using the existing stage. The sloping floor will be rebuilt so that tables can be set up in the space and it will accommodate more than 400 seats. The bowling alley, which was torn down in 2020, will be rebuilt as a food court, and the area in the front will become an outdoor dining courtyard w[th 150 seats. According to the Miramar Food Hall Facebook and lnstagram pages, the plans include 15 food vendors, two bars and ocean view dining. The renaissance of the historic buildings has begun.